We have been hearing the rumors for a while and were fairly certain that this would be the next step for the Universal Theme Parks but having full confirmation that Diagon Alley is in fact on its way, makes this an exciting day for Potter fans all over the globe. If you have read the books or have seen the movies, this has to get you excited. Diagon Alley is one of the central locations of Harry Potters World and if Universal does as good a job on this section as they have done with Hogsmeade, it is, again, going to draw people from all over the globe just to have the chance to walk through it in real life.

What else is known about this Wizarding World of Harry Potter Expansion?

We do know that this expansion is going to be huge and with the draw that the Harry Potter Themed area in Islands of Adventure has brought, you can be sure that this new section will be as good or better than the first. Where else in the entire world can you go to walk through the streets and experience full size buildings and features that you are familiar with in this amazing story? Nowhere, and this is why Universal Studios is building this dream adventure so that it can draw additional guests to the park but also provide a realm that no one else has.

We also know that the main area of Diagon Alley will be built in the Universal Studios park. This will mean that in order to see everything Harry Potter related, you will have to get a ticket that covers your for both parks. It will be worth it though because Universal is building the greatest, most exciting attraction that will join the two parks together, the Hogwarts Express. I am confident that this is going to be an amazing addition and everyone that visits is going to be so excited to see this new development unfold right before their eyes. Who would have ever thought that just normal people would be able to ride the one and only Hogwarts Express from Hogsmeade to Diagon Alley?

Will any new rides be added to the new Harry Potter Section?

The full details have not been revealed yet but there is pretty substantial information being leaked that a new roller coaster is going to be added that will take you through Gringot’s Bank using Mine Carts (or something that has the appearance of Mine Carts). If you remember how these carts twist and turn through the different caverns of the Gringots Bank underground, it makes you think that this could be one of the best rides ever to grace any Theme Park. You can also be certain that there will be additional places to get ButterBeer in this new area. A new themed restaurant and a number of new Shops to purchase more Harry Potter themed memorabilia is sure to pop up along the way as well. All of this is fine with me, as long as they continue to build with such attention to detail as they did with Hogsmeade. Warner Bothers is working with Universal on this project to make sure that it stays authentic to the films so this should be a fantastic addition to look forward to.

How long before it is ready?

Unfortunately, it still has a long time to go. If you are visiting the parks this year, you will not be able to access this new section yet but, you will be able to see it under construction and half of the fun in anything is the anticipation of what’s to come. At least that is what I have to keep telling myself because it is not slated to open until 2014. As we find out additional information on the progress we will be sure to pass it along.

Take a look at the newly released Universal Announcement 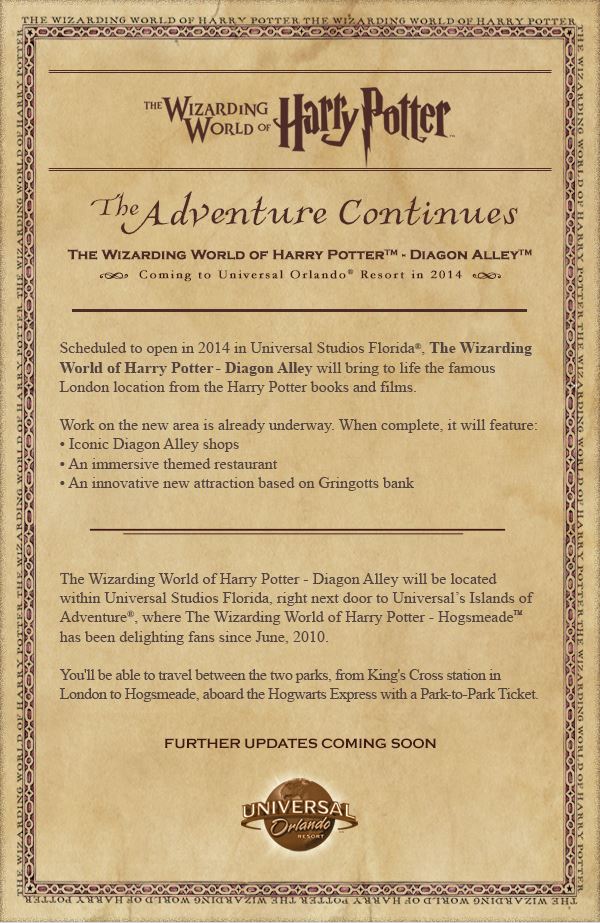 About the Author: Waterpark Hotels Orlando