It might come as a surprise that there are not any Orlando Indoor Water Park Hotels. If you sit back and think about it, does there really need to be? One of the reasons Walt Disney chose Orlando as the premier location to build Disney World was because of the climate. Since it is typically warm throughout the year, no one has decided to build an indoor water park at their hotel.

When looking for Orlando Indoor Water Park Hotels you will find the CoCo Key Hotel with Water Resort. Even though it does have a large section of its water park undercover, it is wide open on one end to the outdoors. No other Hotel in Orlando has anything like it. Having this covered portion of the water park will keep you safe from the elements when it is raining outside.

Just a Few Ideas to stay inside 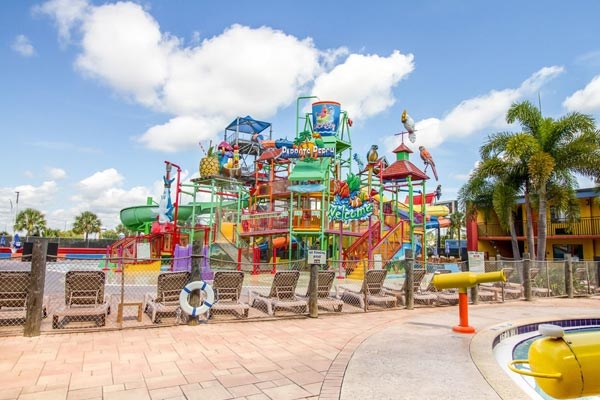 So many water slides

Open to the Outdoors

Small kids will love this

I want to slide

If you are just looking to shield yourself from the sun or rain you might think about the CoCo Key Hotel Water Park Hotel. The CoCo Key Resort has a canopy-covered section with water park-like attractions. With 54,000 square feet of the water park covered by a canopy, it comes closest to being an Orlando Indoor Water Park Hotels.

In order to be a “true” indoor water park, it would need to be enclosed on all sides. One side of the CoCo Key Hotel Water Park is open to the outdoors. However, having this large enclosed space allows you to have fun if there is bad weather, or you just want to get out of the sun for a while.

Be sure to read through the reviews before booking the Coco Key Hotel and Water Park. They are a little mixed. Some guests love this location while others have negative points to share. You can get to the reviews by going to the CoCo Key Hotel Water Park Hotel and clicking on the link over to TripAdvisor. This will give you the latest information and reviews from the most recent guest stays.

A few other options

Since there are not many Orlando Indoor Water Park Hotels as options, there are a few other Resorts to consider.

Does it really surprise you though? One of the biggest attractions in Florida is the mild weather. This is likely the reason it is so hard to find any Orlando Indoor Water Park Hotels. Think about it, the average temperature for Orlando Florida in January is a pleasant 70 degrees. From February on it continues to climb and will not start dropping again until around November or December. Because of this, it should not be a surprise that there are not any Water Parks indoor in Orlando.

The truth is, people flock to sunny Orlando Florida all year, to be out in the sun and not to be stuck inside. You simply can’t beat the year-round warmth of the sun. In fact, during the brutally cold months up north the population of the elderly in sunny Florida swings up to approximately 20% due to the so-called snowbirds wanting to run to a balmy piece of paradise.

We’ve Got You Covered During All Seasons

If you are only looking for Orlando Indoor Water Park Hotels during the winter months because you think that none of the outdoor water parks that hotels will be open, think again. For example: In the winter you will still find that there are many Orlando Hotel Water Parks Open Year Round. Some of the hotels in Orlando have heated pools and are warm to swim in even when it is a little chilly outside. There are simply many hotels in Orlando with indoor pool that are very nice. Although they may not have a water slide or lazy river, it will get you and your family splashing around indoors. So don’t fret. As you can see, there are many alternatives.

Are you looking for the Great Wolf Lodge?

Benefits to having an Indoor Water Park in Orlando

Although Orlando is a warm getaway for most of the year, there could still be a huge benefit to having an Indoor Water Park. In the winter, it does get chilly at night, and being indoors splashing around, sliding on water slides, and playing in a lazy river could be fun. In the summer, it can get very hot in Orlando. Having a climate-controlled space and having the joys of a water park would be a benefit for sure. Also, Orlando is famously known for having a storm blow through, and in these conditions, there is nothing better than being inside. For now, we will have to wait and see if anything else comes about. Check back as we will keep things updated as they change.