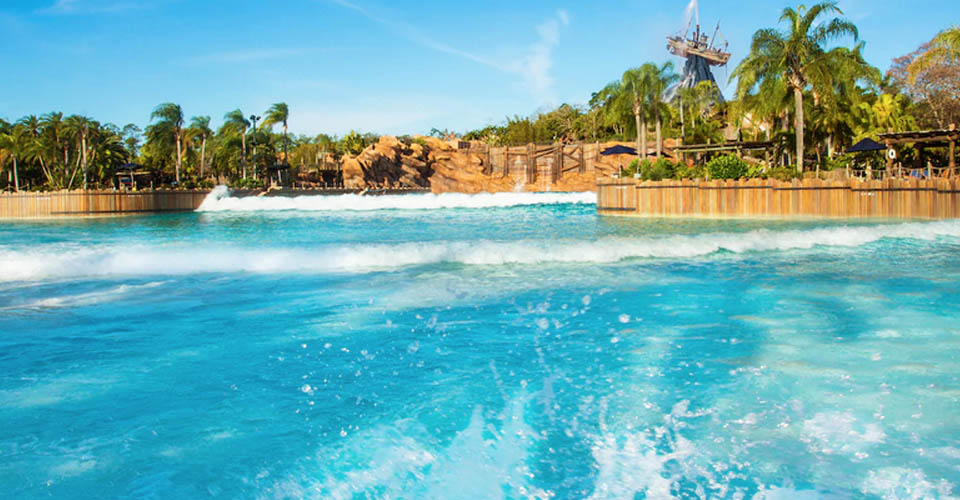 1145 Buena Vista Drive,  Orlando,  Fl  32830
DISCLOSURE: This page may contain affiliate links, meaning when you click the links and make a purchase, we receive a commission.

One of the first major water park attractions you will see after you enter is the Typhoon Lagoon Wave Pool. Set as a main focal point, this is no ordinary wave pool. Other Water Parks have a wave pool but most of them are simple in nature, making simple waves in the water. The main difference at the Disney Typhoon Lagoon Wave Pool is the way that the attraction is presented. You will not see walls of concrete surrounding this monstrosity but you will see a design of wooden plank walls as well as a rock formation built as a fantastic backdrop housing the large reservoir of water that creates the extraordinary waves.

Shipwreck on Mountain behind the Wave Pool at Typhoon Lagoon

View of Waves from Rear side of Wave Pool

Getting Ready to Surf on the Surf Pool at Typhoon Lagoon

Well, not really, but sort of. Up to 6-foot waves will start at the back of the pool and move forward gaining momentum and size while splashing down on everyone in the pool area. The waves at the Typhoon Lagoon Wave Pool never stop. They will give you a breather from time to time but they don’t ever stop coming.

You will know when a big wave is created. A Chalkboard with times is posted nearby as a way to keep track of the wave schedule. Since there are shallow areas at the lagoon that have breakers to keep the major wave action to a minimum, this is also a great place to bring the little ones to play in the shallow water. Sit back in one of the nice lounge chairs on a sandy beach and watch the kids have a great time. The kids will also enjoy 2 small water slides that empty into the bay. These water slides are designed with a small slope to have fun but not allow for picking up too much speed along the way.

When this wave pool was created back in the late ’80s, a lot of thought went into the project. The Typhoon Lagoon Wave Pool was created to offer more than just splashing in a few waves. The developers set their sights on making this pool special by producing waves that were as close to the real thing as possible.

There was a reason for this, to be able to actually surf on waves inside of a Water Park. That’s right, you can actually surf these waves. Well, you can’t just take your surfboard out in the rough waters and go at it, there are way too many people in this pool during operating hours. That is why you can sign up for Surf School at Typhoon Lagoon and take instruction from a professional surfer prior to the opening of the park. Where else can you go to have a nearly private surf lesson on man-made waves?

Whether you are coming to the park during normal hours to splash around in the Lagoon Pool while waves come crashing down on you or you are here to surf early in the morning with a professional instructor, this amazing wave pool is one that has all of the other beat. This is an experience that everyone should have while they are in Orlando.